The fact that Aston Community Day was held a week later than originally planned certainly did not affect the numbers of attendees.

An estimated 4,000- plus people attended the event, which took place October 10 on the grounds of the Aston Community Center.

Sponsored by the Aston Business Association, the day’s events included a parade and business expo as well as various demonstrations and activities for children. 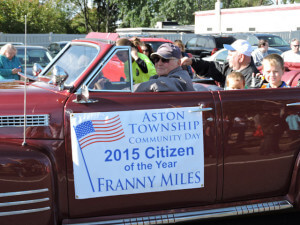 The parade featured schools, organizations, local and state officials, decorated bicycles, fire and police apparatus, cartoon characters and the Sun Valley High School Band. Aston Citizen of the year, Fran Miles, rode with his family in a specially designated car and was honored with a plaque during the ceremony that followed the parade.

In addition, the opening ceremony included the singing of the national anthem, raising of the American Flag, and recognition of  township resident Cameron McCarthy, a young girl who has been very ill, and was unable to attend 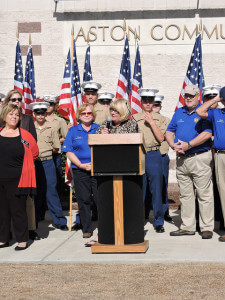 “I like the food, but I really enjoy coming to the expo each year,” said Natalie DiPrince. “It is wonderful to learn about the businesses in our community.”

Local children seemed to enjoy themselves on a variety of inflatables, train rides, jumping trampoline, large slide and rides.

Community Day organizer Maryann Bullen expressed appreciation to the board of commissioners, committee, businesses and volunteers who made the day a success.

“Seeing our residents enjoy themselves makes the hard work so worthwhile,” said Bullen. “It is great seeing everyone have such a good time.”