Aston Commissioners, during the April 15 meeting, presented a proclamation to township residents Darren J. Sereikis and Stephen F. Taylor for attaining the rank of Eagle Scout.

Darren is the son of Michael and Cindy Sereikis and is a senior at Sun Valley High School. He is a member of Scout troop #292 and passed his Eagle Scout Court of Honor on January 28. 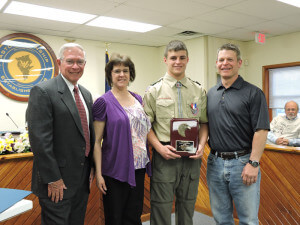 Aston Commissioner Mark Osborn presented Eagle Scout Darren Sereikis with a proclamation during a recent meeting of the board of commissioners. Also pictured are Darren’s mother, Cindy; and father Michael.

Darren has earned 13 required merit badges and 12 non-required badges. He served as a senior patrol leader and assistant patrol leader.

He  is a member of the Sun Valley High School Ice Hockey Club and plays golf and tennis for his school.

A member of the Mount Hope United Methodist Church Youth Group and Missions Team, Darren participated in the restoration of the pastor’s home in 2014. He also helped to restore homes in Hancock County, Missouri in 2012; and Joplin, Missouri in 2013 and 2014. He plans to attend this year’s mission trip to South Carolina.

During his time in scouting, Darren participated in various clean-up projects, such as the Chester Creek Clean-up, and the Delaware County Chapter of Parents of Murdered Children’s Memorial Park. 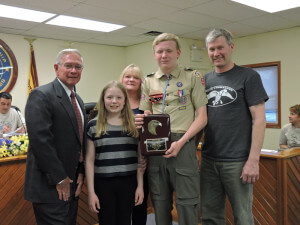 Aston Commissioner Mark Osborn, during the April 15 meeting of the board of commissioners, presented new Eagle Scout Stephen Taylor with a proclamation. Also pictured are Stephen’s mother, Lori; father Frank; and sister, Catherine.

He is a member of Troop #292 and passed his Eagle Scout Court of Honor on February 25.

Stephen began his scouting career as a member of Pack #77 and has earned the Arrow of Light Award, which is the highest award in scouting. As a member of Troop #292 he has earned 13 required merit badges and 15 non-required badges. Stephen served in a number of leadership roles including as senior patrol leader, assistant patrol leader, troop guide and the Order of the Arrow representative.

For his Eagle Scout project, Stephen painted the exterior of St. Timothy Lutheran Church in Aston.

Stephen will be attending college in the fall and will major in communications.