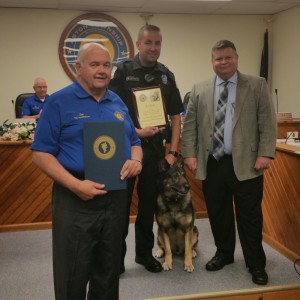 Aston Police K-9 Jax was recognized on the event of his retirement by the Aston Board of Commissioners,  township residents, representatives of the Penn-Delco School District and Neumann University during the June 15 commissioners meeting.

Jax was on-hand for the ceremony with his handler, Officer Mikell Jones, who has been Jax’s partner from the day he arrived.

Jax was born in Slovakia in 2007. After completing extensive training in patrol, narcotics detection and tracking, he began his service with the Aston Township Police Department in 2008.

“Jax has put his life in the line to protect his fellow officers and the community,” said 5th Ward Commissioner Jim McGinn during the presentation. “Over the past eight years he has assisted many law enforcement agencies at the local, state and federal levels.”

During his career, Jax has detected and located more than 50 pounds of marijuana, eight kilos of heroin, five kilos of cocaine, nine firearms, and more than $550,000 in illegal drug monies. He has also prevented assaults on fellow law enforcement officers and deterred criminal behavior.

Jax has quite the impressive reputation in the K-9 community as he placed 2nd in obedience among dogs from across the United States. He also won numerous awards and medals from esteemed K-9 competitions and has amassed 10 awards during his time of service with the Aston  Township Police Department.

Throughout his eight years of service, Jax has accompanied Jones in visiting schools, at local events and area canine demonstrations.  Jax celebrated his 9th birthday on June 10 and at that time Jones submitted a letter of request for the canine’s release from duty, which was approved by the board of commissioners.

Police Chief Dan Ruggieri complimented Jones for “putting the health and welfare of his partner above all else and for allowing Jax to retire with the dignity he deserves.”

Ruggieri proudly declared Jax as being retired and presented him with a police retirement badge.

Jones expressed appreciation to all those who supported Jax, specifically naming Ron Temple of Pet Kraze and Dr. Rosalie Mirenda of Neumann University as well as his wife Jennifer and daughters, McKenzie and Kailyn, and his extended family.

“Jax has been a great partner and it’s going to be difficult to go to work without him,” Jones said. “He turned nine recently and is having some back leg issues, so we thought it was best to retire him and let him live a happy life. It will be really different going to work without him.”

Jones said Jax will continue living with his family.