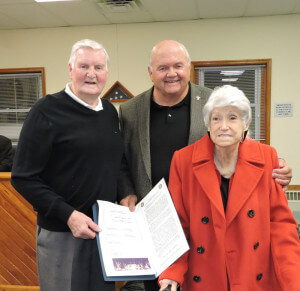 Aston 5th Ward Commissioner Jim McGinn, on behalf of the board of commissioners, during the Nov. 18th meeting, presented a proclamation to Bill and Nora Galbraith celebrating the event of their 65th wedding anniversary.

Both raised in Aston Township, Nora, who was raised on Knowlton Road, was the second youngest of 14 children in the Rudolf family. Bill was the oldest of six children.

Bill has the distinction of being the first altar boy at St. Joseph Church. He graduated from St. Francis de Sales School and St. James High School.

Nora attended the Village Green one room school house and Rockdale Elementary School. She was a student at Media High School when she accepted Bill’s proposal of marriage.

Bill and Nora live on Knowlton Road. They are the parents of six children, grandparents of 15, and great grandpatrents of 15.

The Galbraith’s are known near and far for the magnificent Christmas display at their home, which was enjoyed by countless numbers of people for more than 20 years.

Bill is retired from Electrical Construction with IBEW Local 98 and was superintendent during the construction of the Eagles football stadium. Bill was also electrical construction manager on many projects in Saudi Arabia and  Yemen from 1977 to 1979.

Bill was a certified ski instructor and taught for many years in the Pocono mountains. He formed a tour group for skiers and for more than 15 years, led a  group to Austria, Switzerland, France and Italy.

While Nora was assisting with the planning of her first daughter’s wedding, everyone so raved about the delicious food and her catering skills, that she decided to go into business for herself.

That event led to the creation of “Nora’s Catering.”

The business was successful for 10 years and not only did Nora cater for the  weddings of her other daughter’s and their friends, but for many brides and grooms who heard of her wonderful services.

After receiving the proclamation, Nora exclaimed, “And, nobody thought it would last,” to which the couple received thunderous applause.