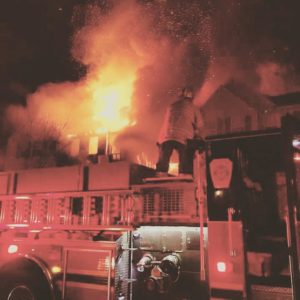 Aston Township has new signs on major roads as you enter our town that say “A Community that Cares”. Late Tuesday evening, November 15, 2016, and in the days that followed, we personified that little public relations snippet more than you can imagine.  Let me tell you about it.

At 11:17pm the Aston Township Fire Department was dispatched to the area of Linda Lane and Birney Highway for a building fire. 27 Aston volunteer firefighters left their home and answered the alarm.  10 mutual aid fire departments, 3 EMS and 6 police units also responded.  Our community cares.

Two residents of one of the main fire buildings were settled in for the night on the second floor of their home. Their smoke detector went off; they followed their home evacuation plan.  They got to their primary exit, the front door, and were met by the fire.  They went out their secondary exit, the rear door and onto the rear deck.  One problem, the deck had no egress off, so they were trapped.  Two men from the neighborhood (one of them an off duty policeman) came into the backyard and found the women.  The men broke off some of the deck’s railing spindles and helped the women through the new hole in the railing and off the deck and away from the fire to safety.  Our community cares.

The Aston police were the first responders to arrive. They quickly radioed in a situation report and information to aid the responding firefighter’s actions.  They then evacuated everyone else from the five remaining homes attached to the fire building.  Many other neighbors had now come out of their homes because of the commotion.  They offered blankets, coats, shoes and even their homes for warmth to the affected evacuees, many of whom had left with just the clothes on their backs, usually pajamas.  They also brought bottled water to the firefighters who were working so hard to save their neighborhood.  Our community cares.

The Aston firefighters arrived a short time after the police. Knowing that all life safety issues had been addressed and aided by many other mutual aid fire companies they quickly established a defensive position, trying to protect the unburned homes.  A second alarm was sounded quickly after their arrival.  The tremendously large volume of fire presented an enormous task before the team.  The flames extended from the front to the back of two homes, from the first floor through the second floor and roof and high into the sky.  Many of the firefighting leaders later told me they had the same feeling that I had when I arrived, that we might lose the entire group of homes. No one spoke of this at the time; we remained focused on the mission before us.  The firefighters maintained this difficult stance, took a substantial beating with intensive heat and smoke and through nothing short of a miracle were able to hold the fire to the place it was when they arrived, the two original fire buildings.  One firefighter suffered a lower leg injury (she’s home and doing well) but everyone else was safe and sound, warm and secure.  Our community cares.

The fire extinguished and the scene made safe we began the investigation the following morning. During this time many of the neighbors and other area residents came to talk to me.  I received more hugs and handshakes and thank yous than I had ever experienced at a single incident in my 39 year tenure in the fire service.  So many people expressed their concern and well wishes for the injured firefighter.  The support and praise for the firefighters was truly overwhelming.  Our community cares.

Two days later was the regularly scheduled business meeting of the fire department. The residents of Linda Lane all chipped in and bought pizza and sandwiches for dinner for the members before the meeting.  As the meeting began the President announced that some of the Linda Lane residents wanted to talk to us.  About 20 residents, many of them children, came into our meeting and personally thanked us.  They told us their personal experiences, and how we impacted their lives.  One young boy (with the help of his mom) explained how he put into action the lessons he learned during our fire prevention presentation at his school.  When told to evacuate he followed his home evacuation plan, didn’t panic, crawled low in smoke, didn’t try to take personal items, got out and stayed out, and assembled with his family outside making sure everyone was safe.  They also brought some hand-written notes of thanks from other residents that weren’t able to attend.  Our community cares.

The family and friends of the Linda Lane community have set up many ways to donate to the affected families of this devastating fire. Commissioner Carol Graham has established a point of contact at the township building to coordinate donations.  Many go-fund-me accounts have been established.  The residents of Hoag Lane, the next community down the road, have begun a donation effort.  The Sun Valley High School Seniors “pie a teacher” pep rally fundraiser changed their benefactor to the victims of the Linda Lane fire.  Northley Middle School is planning another fundraiser. Our community cares.

As we begin this busy holiday season allow me to remind everyone of two valuable fire safety rules that were proven effective during this tragic event:

Most importantly remember to always take care of each other. Take care of your family.  Take care of your friends.  Take care of your neighbors.  We are a community, and together our strength is incredible.  Even the most devastating events can be overcome if we take it on together.  Next time you see that sign when you come into Aston know that it’s more than just a public relations jingle, it’s real, we live it everyday.

Happy Holidays. Be safe, every time.