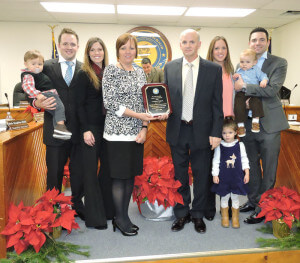 Aston first ward Commissioner Mike Fulginiti poses with his family on the event of his retirement from the board of commissioners. With Fulginiti is his wife, Andrea, son Michael, daughter-in-law Heather, daughter Amber, son-in-law Ron Duquette, and grandchildren Cade, Reese and Dean. (photo by Loretta rodgers)

First Ward Commissioner Mike Fulginiti, during a recent meeting of the board of commissioners, received a standing ovation on the event of his retirement, and in appreciation for his years of dedication to the township.

For the past two-and-a-half years, Fulginiti, 58, has been waging a battle with bulbar onset Amyotrophic Lateral Sclerosis (ALS). The neurological disease was brought to national attention in the 1930’s when professional baseball player Lou Gehrig was diagnosed.

Unable to speak, Fulginiti used a special application on his cellular telephone to communicate his feelings.

“It is with regret that I can no longer represent Aston Township residents due to my health issues,” Fulginiti said. “I would like to thank everyone for their patience these past two-and-a half years as I have progressed and am no longer able to speak. Therefore, I feel as though I cannot represent my constituents the way you should be represented. I have developed some very special friendships and you will remain close to my heart. I will be there for you if I am needed.”

Fulginiti expressed appreciation to his wife Andrea, daughter Kerri and her husband Dinh, daughter Amber and her husband Ron, and son Michael and his wife Heather. He also said he was very thankful to God for the blessing of his five grandchildren, Daxton, Kamden, Reece, Dean and Cade.

Fulginiti also thanked his fellow commissioners as well as all township secretaries and staff.

In 2007, Fulginiti was appointed to fill the unexpired term of deceased Commissioner Bill Jones. He was subsequently elected and re-elected by his constituents to represent them on the board of commissioners.

Commissioners President Jim Stigale presented Fulginiti with a plaque and expressed his personal appreciation for a job well done.

“Mike has brought knowledge and concern of community with integrity to many decisions we have had to make over the years,” said Stigale. He displayed a unique business approach to our decisions. I’d like to personally thank Mike for helping me when I came to the board. He helped me to understand what it takes when a decision needs to be made to serve the residents of Aston. Although we did not always agree on everything, he always showed me support as president of the board. We will continue to pray for Mike and his entire family as he continues to fight this challenge. We are all very proud to have served with Mike.”

In closing, Fulginiti thanked the community and promised to remain strong in his resolve.

“It is with great appreciation I would like to thank the community for their thoughts and cards that have lifted my spirits as I continue to battle this horrible disease. I will not give up hope or stop fighting.”