Bruce Reimer Honored on the Event of his Retirement

Previous Next
Bruce Reimer Honored on the Event of his Retirement 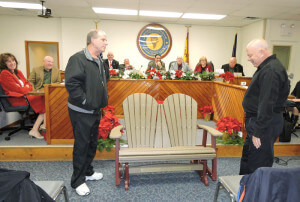 Director of Public Works, Russ Palmore presents Bruce Reimer with a token of appreciation for his years of service. photo by Loretta Rodgers

Aston Township public works employee Bruce Reimer, during the December 16 board of commissioners meeting, was recognized on the event of his retirement and presented with a plaque for his years of dedicated service.

Reimer became a full time employee of the township in 1988. During his 27 years of dedicated service, he had varied responsibilities, which included cutting grass in the summer and plowing snow in the winter. He is captain of the street sweeper crew and head of the recycling court, which is located behind the township building.

Reimer and his wife Angela have resided in the township for more than 30 years and the couple are the parents of three children. 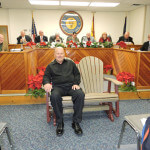 Reimer is an active member of the Lions Club and participates annually in the organization’s pancake breakfasts.

“Bruce is a very dedicated worker and is well liked by everyone,” said 5th Ward Commissioner Jim McGinn. “He is always ready and willing to help any of his co-workers as well as the office staff.”

At the conclusion of the presentation, Director of Public Works, Russ Palmore presented Reimer with a glider, which has his name and dates of service on an engraved plaque.