Town By Town: Finding a place to put down roots

Previous Next
Town By Town: Finding a place to put down roots 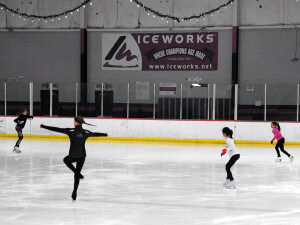 At the IceWorks. A township commissioner notes Aston’s 15 parks, saying, “You are always within walking distance of at least one.” (CLEM MURRAY / Staff Photographer)

One in a continuing series spotlighting real estate markets in the region’s communities.

When Barbara M. Mastronardo was 10 years old, her parents decided to trade life in Ridley Park for the “Wild West.”

After a journey of nearly nine miles, the pioneers reached their destination: Aston Township.

It was a lot harder getting around in 1962. I-95 had been under construction for just three years; travel was limited to well-traveled two-lane roads. And, in truth, they weren’t pioneers: The Delaware County community was settled in 1682 and, thanks to Chester Creek, had been a happy mix of industry, farms, and small businesses for 280 years.

But her parents’ move, and a similar relocation from Marcus Hook for her grandmother and uncle, were necessary, says Mastronardo, a Weichert Realtors’ agent.

“They started servicing lawn mowers at Aston’s Five Points,” the intersection of Concord and Pennell Roads and Knowlton Road to the east, she says, “but were working full time at Sinclair [refinery in Trainer] and wanted to be closer to their new business.”

Today, with prices ranging from $33,000 for a two-bedroom mobile home in Village Green, to $525,000 for a 3,300-square-foot newer house (2002) in Benson Builders’ Valleybrook Chase, Aston has become a major draw for first-time buyers in search of that ever-elusive affordability.

There are condos, twins, and townhouses too, with a few rental apartments.

Much of what is for sale here is masonry construction, but in need of updating. Many houses are being put on the market by people who bought them new in the 1950s, ’60s, and ’70s. For example, in 1950s-era Valleyview there are ranchers, split-levels, and Colonials in the mid-$200,000 range.

There isn’t much for sale, either: 56 homes, a two-month supply of inventory, with 25 more houses under agreement of sale, Mastronardo says. In the last six months, 101 houses have gone to settlement.

Many call Aston a blue-collar town, intending it as praise, not criticism.

“It is a place where the husband and wife work, pay their bills, raise their children properly, and get involved in activities,” says Rick Yannuzzi, who has owned Rick’s Sheds & Gazebos – one of Aston’s “mom and pop” anchor businesses – on Concord Road for 35 years.

The activities he refers to include the fall’s Community Day and maintaining the Veterans Memorial Garden, which honors residents in the military and emergency services. Plus, sports of all kinds.

“When people move into Aston, they start to remodel the homes they buy because they are planning to stay,” Yannuzzi says.

“It is a community built on a blue-collar work ethic,” Mastronardo says of generations of residents employed at local refineries and companies such as Scott Paper. The legacy is evident in a 90 percent homeownership rate here.

Because a 1 percent earned-income tax imposed by the Penn-Delco School District eases some of the property-tax burden, the owner of a 1,300-square-foot house has an annual bill of about $4,100, Mastronardo says.

James M. Stigale, president of the township Board of Commissioners, moved to Aston from Southwest Philadelphia with his wife, Carol, more than 20 years ago and has reared two children here.

“I have always found Aston a friendly place,” says Stigale, a funeral director. “We have 15 parks here, and no matter where you live, you are always within walking distance of at least one of them.”

Aston also is home to the IceWorks, an indoor ice skating and hockey facility that draws thousands.

While trying to keep the lid on property taxes, Aston also is forever trying to make what residents consider good even better. The township has just replaced the floor of the gym in its 20-year-old community center, Stigale says, adding that a $1 million grant from the Delaware Valley Regional Planning Commission is funding a streetscape improvement program that will first target Pennell Road between Concord and Duttons Mill Roads.

“About 25 percent of the people who live here work here,” Granger says, many at Neumann University.

“We have a good, positive, and effective relationship,” says Rosalie Mirenda, who has been Neumann’s president since 1996 and a driving force in its evolution from what she describes as “a small, well-meaning mission-based” women’s college 50 years ago to a university that has set its sights on drawing students from every part of the world.

While Neumann becomes more residential (a third of its 2,100 full-time students live on campus) and Aston becomes more of a college town, commuting students and faculty support local businesses and pay taxes, she says.

“Every year, we do an economic-impact statement, and it always surprises us to see the contribution Neumann makes,” Mirenda says.